You're gonna love this keto stuffing, it tastes and smells yummy just like traditional! It's one of my favorite keto Thanksgiving recipes.

Thanksgiving 2022 is right around the corner on Thursday, November 24th!

There's no nuts, no meat, no pork rinds and no cheese. Just light and tasty keto bread.

A ½ cup of this homemade keto stuffing has only 5 grams of net carbs, compared to 21 grams net carbs in box stuffing. That's a huge difference!

This recipe is keto, low-carb, vegetarian and nut-free.

How to make stuffing

Stuffing is a savory form of bread pudding. The basic stuffing recipe is to sauté aromatics like onion, celery and herbs in lots of butter. Then toss dry bread cubes (in this case keto bread cubes) with the seasoned butter mixture, some eggs beaten with broth to form a savory custard, and bake until crisp and golden-brown.

This recipe is technically a turkey dressing, rather than a turkey stuffing, because it is cooked separately in a baking dish. If you brine your turkey, as I do, then the turkey should be cooked separately from the stuffing for best results.

Use your favorite keto bread (no more than 6 grams net carbs per slice). I've found that the best bread for keto stuffing is 647 white bread. It looks, smells, feels and tastes just like Wonder bread.

You'll need a whole stick of salted butter. Trust me. This is the way. If you want to make this recipe vegan, substitute with vegan butter.

I love Bell's poultry seasoning. My family has been using it in stuffing for as long as I can remember and it smells like Thanksgiving.

You'll need eggs to bind it all together. You can leave out the eggs to make it vegan, but you'll get a looser stuffing.

Step 1: Tear or slice bread into 1 inch pieces and leave out overnight on a baking sheet to dry out OR step 2.

Step 2: Lightly toast in the oven at 350°F for 15 minutes with the oven door slightly open.

Step 3: Melt butter in a large skillet over medium heat.

Step 4: Brush a baking dish with some of the melted butter and set aside.

Step 7: Stir in about half of the broth to deglaze the pan.

Step 9: Place bread cubes in a large bowl and pour in seasoning mixture.

Step 10: Toss to evenly distribute seasonings over the bread cubes.

You can prepare this stuffing the day before. Just follow all the steps except for baking. Cover the baking dish and refrigerate until ready to bake the following day.

Personally, I love a good old-fashioned giblet stuffing and will sauté some giblets in butter, chop them up and fold them into the stuffing.

You can also use bacon fat instead of butter for bacon stuffing, or cook loose sausage with the onions and celery for baked sausage stuffing.

This basic stuffing recipe is the perfect accompaniment to Thanksgiving turkey! However, don't wait until turkey day to enjoy keto stuffing. It goes great with baked chicken leg quarters, get the recipe from my friend Sarah over at Feast for a Fraction. You can also use it to stuff baked acorn squash. Or try baked pork chops and stuffing.

🐿 How to store leftover stuffing

Cooked stuffing can be refrigerated for up to 4 days. Store in an air-tight container.

🧊 Can you freeze stuffing?

Freeze leftover stuffing by transferring it to an airtight container. Freeze for up to a month.

What is the difference between stuffing vs dressing?

Stuffing is used to stuff another food such as pork chops, acorn squash and poultry. Dressing is cooked in a separate container.

Do you put eggs in Thanksgiving stuffing?

Yes. Eggs are a binder that hold the stuffing ingredients together like glue.

You're gonna love this keto stuffing, it tastes and smells yummy just like traditional! It's one of my favorite keto Thanksgiving recipes. 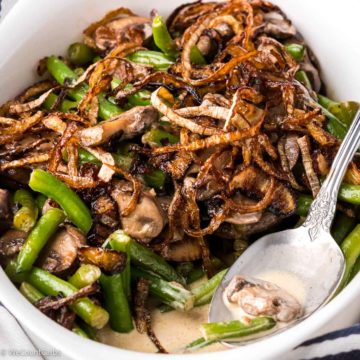